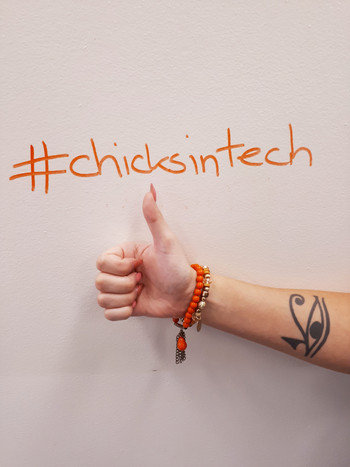 The year of the #chicksintech

Research shows that back in the 80’s women had little enthusiasm in computing. Computers were sold as “toys for boys” and gaming was something women didn’t show much interest in. For whatever reason that cultural stigma has stuck and there is now a need to eradicate the cultural norms. It’s time for #chicksintech.

From the beginning of the year we have seen a worldwide movement in gender equality. We have seen Hollywood make their stand with TimesUp at the Golden Globes and this week at the Oscars the MeToo social media movement. Today is International Woman’s Day, and as a Smile IT team we thought it appropriate to celebrate and stand up for our woman in Technology and take action on the call to PressforProgress. Our aim is to motivate and unite our staff, clients and work community to think more, act on and reach for gender equality.

Stats show that the western world seems to be behind our China and India counterparts with 80% women in China having C-Level tech jobs as opposed to 54% of the U.S. Women in China have a substantially higher representation at the top of corporations and this tells us that when senior women are empowering an organisation they overwhelmingly support other women.

Smile IT has three awesome chick in techs! One of the Smile IT techie chicks team members Chelsee, shares her experience.

“In a class predominantly male and being 1 of 4 woman, I was the only woman to graduate from my TAFE course”. “I believe the lack of female role models in the field and unequal pay for the same skills contributed to this scenario.”

At Smile IT we want to support our #chicksintech, give them every bit of opportunity that our male counterparts have and make sure we reach the top so that we can become role models in the diverse Technology Field. Here is some valuable advice from Chelsee, for women interested in pursuing a career in the tech world:

• Perseverance – Know you are worth it – Women bring a unique perspective and skill set to a tech company. There is so much opportunity as it is a hot industry to be in, with lots of diversity. Do not allow yourself to be intimidated by a room full of men whether it is in the classroom, when you are studying or your workplace.

• Ambition – You should never be afraid and never think that the guys are better at it then you – You are so capable of the same, and more, so just go for it.

• Unconventional – Resign to the fact that you need to become a life-long learner – Technology is a fast-paced career and demands growth and proficiency in each role. Keep current by joining user groups, using technology enhanced lessons plans and following Women role models on social media – these are just a couple of ways to stay on your game.

Happy International Woman’s Day 2018, especially to all the #chicksintech!

Smile IT is a Brisbane-based It provider, offering managed IT services, cloud services, Office 365 migrations and much more. Contact us with any of your IT questions.